The year was 1867. The rural community of Bainbridge, Ohio was in need of a bank to assist the town’s citizens and its thriving merchant population. Therefore, four area men, Elijah Rockhold, William Cook, Aaron Ferneau and Joseph P. Brown, pooled their accumulated sums of money and organized the Rockhold, Cook & Company Bankers. Mr. Rockhold served as president and Mr. Cook toll the position as the first cashier. The first ever recorded banking entry bears the date of August 9th 1867. 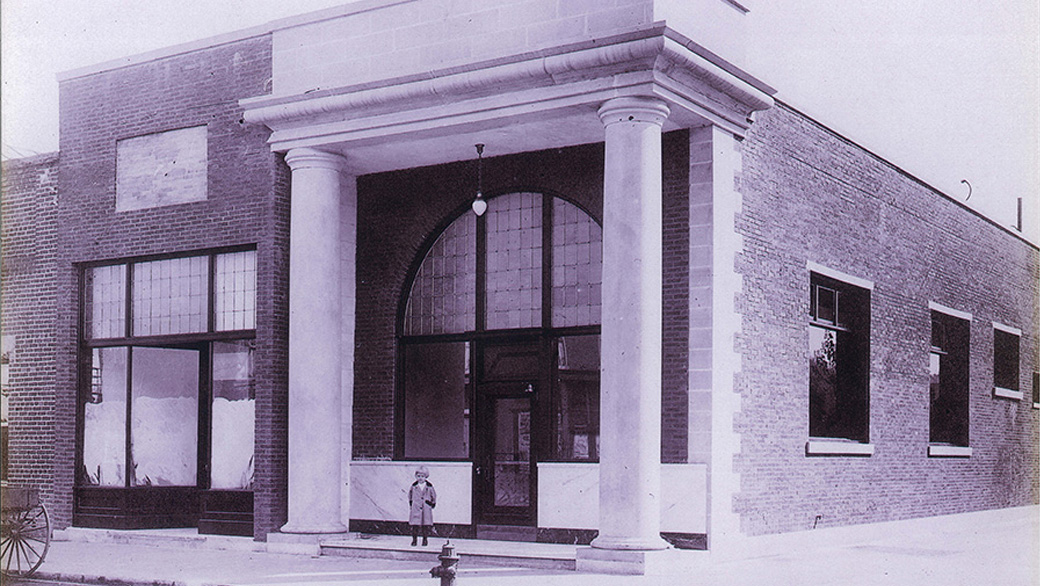 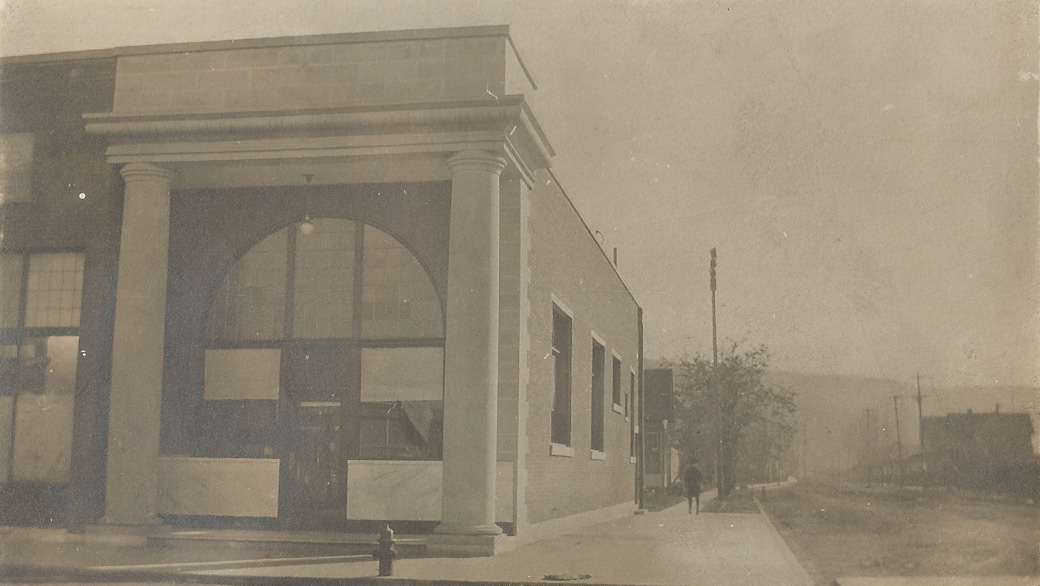 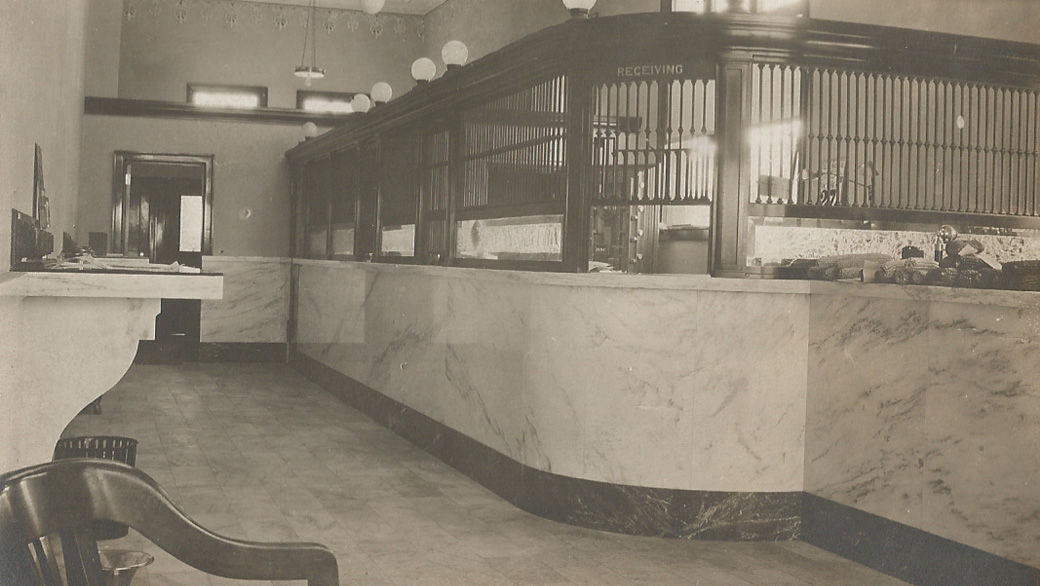 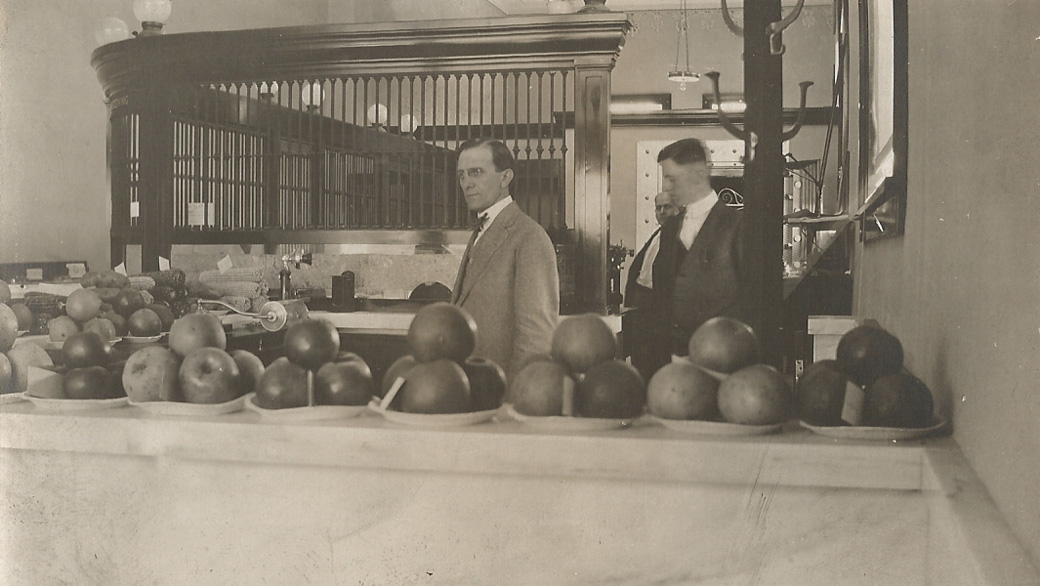 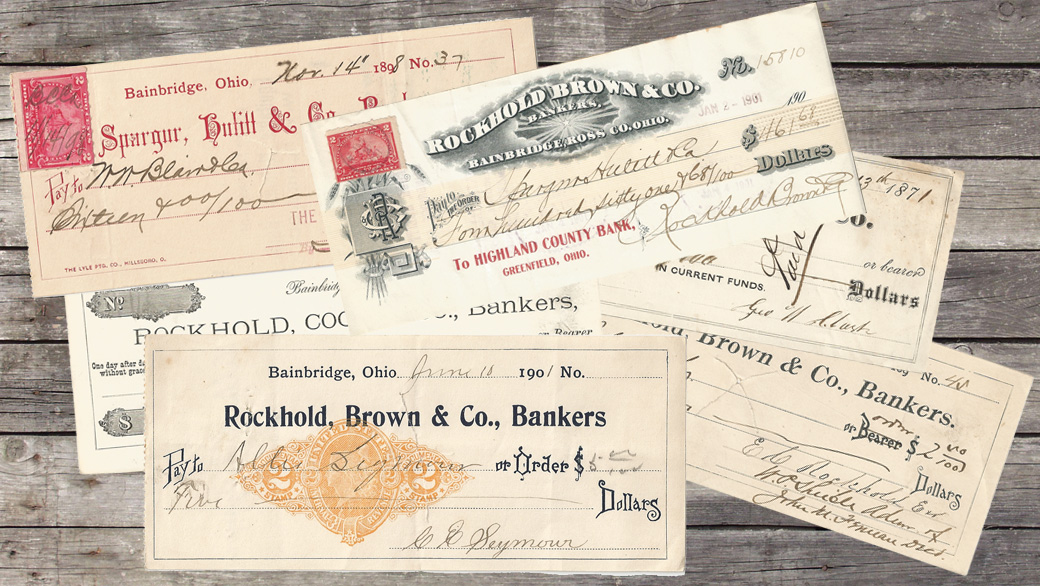 The Bank was located in the Rockhold Block on West Main Street between the Rockhold’s General Store and the Stone Tavern. Prior to their merger, Rockhold and Brown each operated dry goods and general stores and Ferneau was engaged in farming. In 1892 after Mr. Ferneau retired, his interest was assumed by Elijah C. Rockhold, the son of one of the organizers of the Bank, and the Bank’s name was changed to Rockhold, Brown & Company, Bankers1.

In 1915, the firm moved into newly erected banking quarters on the southeast corner of Main and Quarry Streets and has remained at that location ever since.

Another banking firm was started on July 1st, 1878 by J.B. Spargur, John Hulitt, B.C. Hulitt, William Clayburn and Asa Spargur. It was located beside the alley on the north side of Main Street between Maple and Quarry Streets. Known as Spargur, Hullit & Co., it was hard hit by the depression in the early 1930s. In July 1932, Rockhold, Brown & Company bought out the Spargur, Hullit & Co. bank.

In December of 1943 the bank was given a charter by the State of Ohio and on January 1, 1944 it started operating as an incorporated bank, becoming the town’s only financial institution23.

Since this time the Bank has seen vast changes in the banking industry. Despite these changes the bank has continued to thrive while serving Bainbridge and the surrounding communities. In 2009 the Bank successfully opened its first ever full service branch located at 11125 North Shore Drive next to the Rocky Fork Lake.

At Rockhold Bank customers have always been able to count on the fact that someone knows their name and is concerned about their financial welfare. The Bank hopes to continue this community minded legacy by treating our customers with the care our friends and neighbors deserve.

For a very long time, nearly 150 years, the Bank has been an integral part of the community as well as a survivor of recessions, depressions, bubbles and busts - all the while remaining locally owned. We plan on keeping it that way for a long time to come.

1 The Greenfield Daily Times: October 16, 1986
2 Ibid.
3 Credit for the compilation and composition of most of this History goes to Nancy Baum in the “History of Bainbridge”.

Would you like a checking account with cell phone insurance, identity theft protection & resolution, and credit monitoring? If that is something you would be interested in, then you're looking for a Rockhold Bank Select checking account.

Rockhold Bank is proud of our community defenders.

The Rockhold Defender personal checking account was designed specifically and exclusively for Military, Veterans, Law Enforcement and Fire/EMS Personnel. It’s our best account, with a lineup of great benefits and no monthly service charge (with E-statements and a qualifying direct deposit). 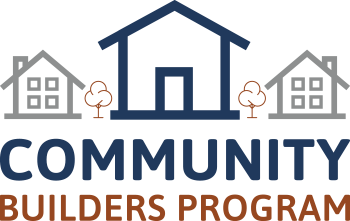 The Community Builders Program is designed to allow Rockhold Bank to partner with local charities and their supporters to promote charitable outreach in our communities. Through this Program, Rockhold Bank will make discretionary contributions to eligible charities based on the quarterly average deposit account balances held in the charities’ supporters’ accounts. This Program also offers interest-bearing checking and savings accounts exclusively for charities.

You are now leaving Rockhold Bank’s website and are going to a website that is not operated by the Bank. Rockhold is not responsible for the content or availability of linked sites.

You are now leaving Rockhold Bank’s website and are going to a website that is not operated by the Bank. Rockhold is not responsible for the content or availability of linked sites.